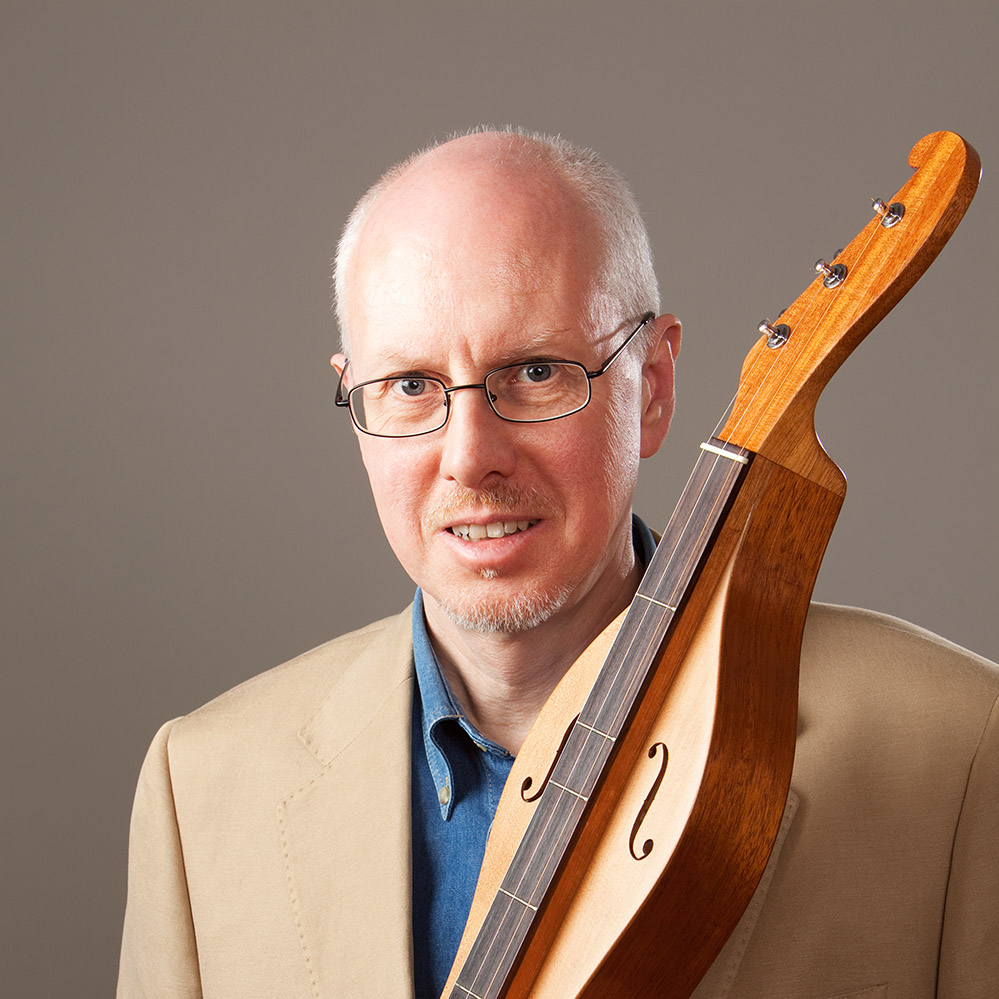 With no training in music but good woodworking skills, Dan built two dulcimers whilst at school and then played mandolin in the school folk band.  Inspired by legendary British dulcimer player Roger Nicholson, with whom he was later to work, Dan learned a little early music on the dulcimer.  At university he taught himself guitar and, aside from fifteen minutes coaching with the British virtuoso guitarist Martin Simpson, is still completely self-taught on his instruments to this day.  His university days were certainly formative and artists he first heard then, like John Martyn, The Pentangle and Gryphon have undoubtedly shaped the development of Dan’s highly individual and eclectic style.

In the late 70’s and early 80’s and with a folk repertoire on guitar, Dan played floor spots and support sets in folk clubs and performed in charity concerts.  1985 saw a turning point when Dan gave the first of three guitar concerts at the prestigious Barbican Centre in London and then followed local concerts and folk club bookings.  Dan left a management job in 1992 to tour the UK folk circuit, releasing his first CD album, Guardian Spirit, a year later.  Frequently featured in folk music and local UK press, Dan has made many appearances on BBC and other local radio stations, giving interviews and live performances.

1997 saw the release of Dan’s second CD album Spirit Dancing, featuring the dulcimer and collaborations with London’s Roger Nicholson.  That year and with Roger, Dan undertook his first US tour to Boston, Massachusetts and the North Eastern Dulcimer Symposium in the Adirondack mountains of upstate New York.  Dan’s next US tour was to Florida in 1999 and thence to Kentucky in 2000 for a tour including Kentucky Music Week and Weekend festivals and a live appearance on Fox FM TV.

Those early Kentucky festivals opened many doors for Dan.  There he met many of the leading American exponents of the dulcimer and worked with two dulcimer legends, Jean Ritchie and (honorary Professor) David Schnaufer.  David’s protégé, the brilliant Stephen Seifert, was there too, who later features as guest artist on one of Dan’s albums.

Numerous US trips and tours quickly followed to teach and perform at American dulcimer and folk festivals – some of them several times each, like Kentucky Music Week and the Dulcimer Chautauqua On The Wabash festival in Indiana.  Indeed, Dan’s dulcimers have taken him from Texas to Tennessee and from Florida to New York state, not forgetting a couple of trips to Ireland and France in between.

Undoubtedly a highlight of Dan’s career has been duets with American dulcimer maestro Stephen Seifert recorded at (award-winning) Thomm Jutz’ studio in Nashville and, then to perform solo and with Stephen again at the prestigious Turner Hall in Nashville, Tennessee.

Meanwhile in the UK and with a shift towards a more classical audience, Dan found himself giving concerts in churches, arts centres and small theatres as well as teaching singing and vocal skills, which also resulted in international renown.

Dan’s Spirit-Dancing trilogy of CDs was complete in 2003 when he released Autumn Dance, his most complex album to date featuring an array of artists, instruments and styles, including his unique electro-acoustic guitar work.  Let It Be Me, a largely dulcimer album, followed in 2010 and more recently Au Vieux Moulin in 2014.  Featuring a variety of dulcimer styles and original compositions, Au Vieux Moulin is Dan’s most popular album to date and features English actress and classically-trained singer Rebecca Hallworth on vocals, international jazz-man Andy Crowdy on bass and guitar and a guest appearance by Stephen Seifert.  Working with British producer and BBC broadcast engineer Russ Dawson Butterworth in excellent studios has resulted in Dan’s albums having highly professional production values and being polished productions.  Indeed Dan’s albums, released on his own label DanSing Music, have received glowing reviews on both sides of the Atlantic and several thousand copies have been sold with global distribution, courtesy of the Divine Art Recordings Group.