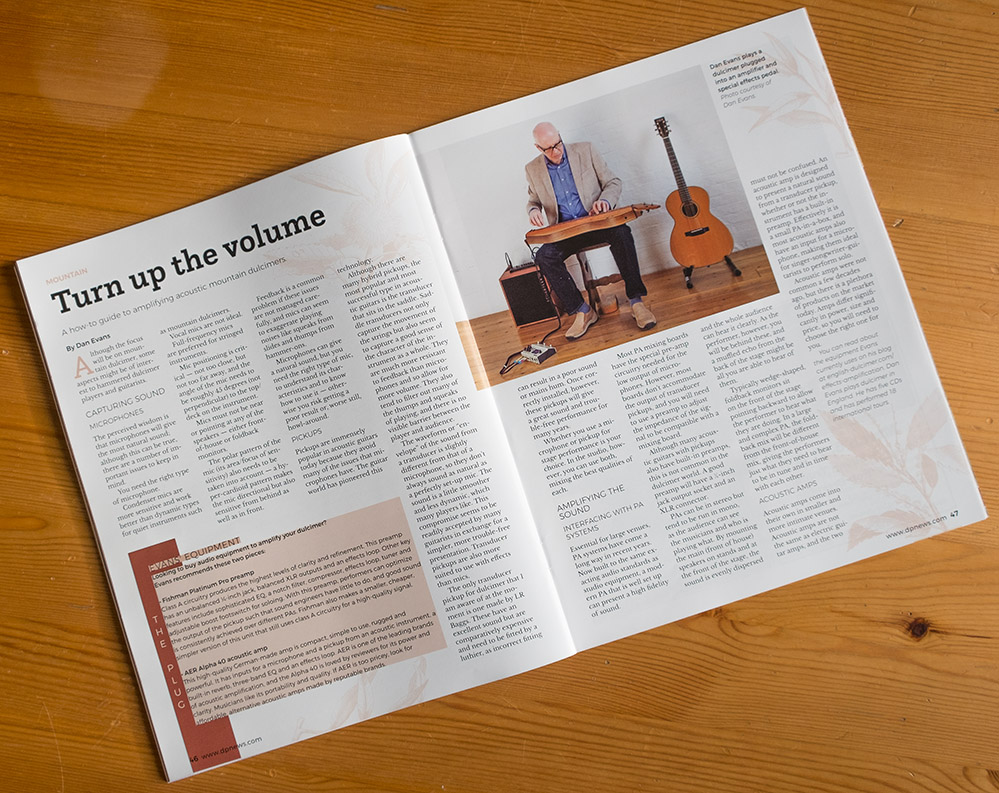 In this article (Part 1) I will explain how to amplify mountain dulcimers and what effects work particularly well with them.  Although written for the mountain dulcimer, some aspects may be of interest to hammer dulcimer players and guitarist also.  In Part 2 (to be published at a later date) I will discuss electric dulcimers, and the effects and amplification suitable for those.

The perceived wisdom is that microphones will give the most natural sound and, whilst this can be true, there are a number of important issues to be born in mind …

… so microphones can give a natural sound but you need the right type of mic, to understand it’s characteristics and to know how to use it – else you risk getting a poor result, or worse still, feedback (howl-around).

The immense popularity of pickups in acoustic guitars today is because they work in a different way and so avoid many of the issues that microphones have.  As you may know, the guitar world has pioneered this technology.

Although there may variations on the theme and many hybrid pickups, the most popular and most successful type in acoustic guitars is the transducer that sits in the saddle.  Saddle transducers not only capture the movement of the strings but also seem to capture a good sense of the character of instrument as a whole.  They are much more resistant to feedback (howl-around) than microphones and so allow higher levels of volume to be achieved.  They also tend to filter out many of the thumps and squeaks of playing and there is no visible barrier between the player and audience.

The waveform or ‘envelope’ of the sound from a transducer is slightly different from a microphone, so they don’t always sound quite as natural as a perfectly setup mic.  The sound is a little smoother and less dynamic, which many players like.  This compromise seems to be readily accepted by many guitarists in exchange for a simpler, more trouble-free presentation.  Transducer pickups are also more suited to use with effects than mics.

The only transducer pickup for dulcimer that I am aware of at the moment is that made by LR Baggs.  These have an excellent sound but are comparatively expensive and need to be fitted by a luthier, as incorrect fitting can result in a poor sound or mains hum.  Once correctly installed however, these pickups will give a great sound and trouble-free performance for many years.

Weather you use a microphone or pickup for stage performance is obviously your choice.  In the studio however, you can use both, mixing in the best qualities of each.

Essential for large venues, PA systems have come a long way in recent years.  Now built to the same exacting audio standards as studio equipment, a modern PA which is well set up, can present a high fidelity of sound.

Most PA mixers (US=boards) have the special pre-amp circuitry needed for the low output of microphones.  However, most mixers (boards) don’t accommodate the output of transducer pickups and you will need to use a preamp to adjust the impedance of the signal to be compatible with a mixer.

Whilst many acoustic guitars with pickups also have built-in preamps, this is not common in the dulcimer world.  A good preamp, as well as a ¼” jack output socket, will also have an XLR output.  This ‘balanced’ signal avoids the need for a DI box on stage.  There are other advantages to preamps and the more complex ones have many additional features, including tuners, EQ, notch filters etc.

Aside from any special features, a good preamp does 3 things – it: 1) corrects the impedance, 2) raises the signal voltage to ‘line level’ and 3) creates a ‘balanced’ output signal. 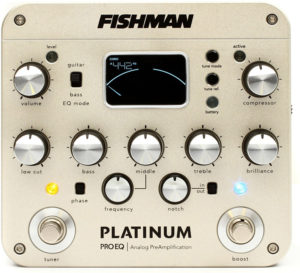 The illustration shows a state-of-the-art Fishman Platinum Pro preamp.  Class A circuitry presents the music with the highest levels of clarity and refinement.  It has unbalanced ¼” jack and balanced XLR outputs as well as an effects loop.  Other key features include sophisticated EQ, a notch filter, a compressor, an effects loop, a tuner and an adjustable boost footswitch for soloing.  A preamp like this allows the performer to optimise the output of their pickup such that the sound engineer has little to do and a consistently good sound is achieved over different PAs.  Fishman also make a make a smaller, cheaper, more-simple version of this unit, but still using class A circuitry for a high-quality signal.

PAs can be in stereo but tend to be run in mono as the audience can see the musicians and who is playing what.  By mounting the main (front of house) speakers on stands and at the front of the stage, the sound is evenly dispersed and the whole audience can hear it clearly.  You as the performer however, will be behind these and all you might be able to hear of them could be a muffled echo from the back of the stage.

Smaller and more intimate venues is where acoustic amps come into their own.  Acoustic amps are not the same as electric guitar amps and the two must not be confused.  (See Part II on electric dulcimers for more on this.)  An acoustic amp is designed to present a natural sound from a transducer pickup, whether or not the instrument has a built-in preamp.  Effectively it is a small PA-in-a-box and most acoustic amps also have an input for a microphone, making them ideal for singer-songwriter-guitar-players to perform solo.

Whilst acoustic amps were not common a few decades ago, there is a plethora of products on the market today, with most amplifier manufactures making an acoustic offering.  They differ significantly in power, size and price so you will need to choose the right one for you, but I have yet to hear a poor one that doesn’t do its job at least reasonably well. 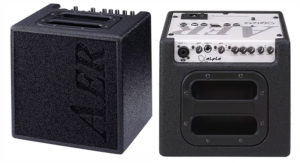 The illustration is of the front and top view of an AER Alpha 40 acoustic amp.  This German-made amp is compact, simple-to-use, rugged, powerful and of high quality.  It has inputs for a microphone and a pickup from an acoustic instrument (without or without a preamp), a built-in reverb, three-band EQ and an effects loop.  AER is one of the leading brands of acoustic amplification and the Alpha 40 is loved by reviewers for its power and clarity and liked by musicians for its portability and quality.  The price however is premium but there are many alternative acoustic amps made by reputable brands which are more affordable.

This section is necessarily more subjective, as each player will want to make their own unique sounds.  What I offer you however, is what I think of as best-practice and what works and doesn’t work to my ears.  And this could be the most suitable starting point for a newcomer to experiment further and develop their own signature sounds.

I believe that there is a limit to what effects can normally be applied to acoustic dulcimers, so this section will be short and I will deal with effects in more detail in Part II on electric dulcimers.

Anyone walking into a music shop selling electric guitars, will doubtless have seen the great variety of coloured foot-pedals to change the sound of your instrument.  So let me start by grouping effects into 3 main categories, roughly following the groupings used by leading effects manufacturer Boss – and the sequence in which they are normally used.

Category 3 – delays and reverbs – in essence, these are echoes that place the instrument in a sound space, which can add to the realism

So which ones work best for acoustic dulcimers?  At the start of the signal path you may already be using a preamp, so category 1 effects are not particularly suitable or needed.  In particular I do not recommend using distortion.  This is because the acoustic waveform is already complex and to complicate it further with overdrive will result in a thin, ‘fizzy’ sound, rather than the full-bodied overdrive of an electric dulcimer – see Part II.

Conversely, and at the end of the signal path, delays and reverbs seem to work very well with acoustic dulcimers, which seem to need more reverb than guitars.  Reverbs place the instrument in a natural sound-space and delays give copies of the sound to add depth and create a fuller sound, which is ideal for the solo dulcimerist.

In moderation, some modulation effects work well too.  In particular a chorus effect will add a cool, spatial quality and this works particularly well with arpeggiated or strummed chords.  By way of contrast, a little phase effect can add a pleasing warmth and body to the sound especially on drones.  Used sparingly, a flange effect might provide a rolling rhythm of texture changes to a fast tune.

If you were thinking of buying foot pedals, I’d recommend the market leader brand Boss for robust and great sounding pedals.  I’d recommend getting a chorus first, then a delay, then a phase.  These three alone will give you countless permutations of texture, which could be changed mid-song. 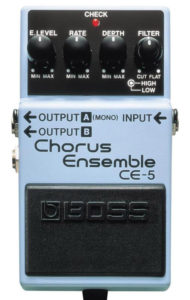 The illustration shows a Boss CE-5 chorus pedal.  The key parameters are level (how much chorus), rate (the frequency at which the tone changes) and depth (the thickness or resonance of the sound).  The Filter gives some EQ, specific to the treated sound.  Outputs A and B give mono or pseudo-stereo options for more complex routing (eg using two different amps, one with treated sound, one without).  Pressing firmly on the Boss symbol with your foot switches the effect on and off whilst playing.

Transducer pickups offer may advantages over microphones and work well with effects too.  They do however need to be impedance-matched to the PA with a preamp or used with an acoustic amp.  Mountain dulcimers seem to need quite a lot of reverb and sometimes suit a little of a modulation effect like a chorus.

I hope this article was helpful.  I am bit nerdy about such matters but have tried to keep this article simple and focussed.  I have not included a glossary and if anyone wants clarification of the terms or concepts, I’d be happy to explain them to the best of my knowledge.  You can read about the equipment I currently use on my blog here.