Following on from part 1, my previous article on amplifying acoustic dulcimers, this article now focuses on the electric dulcimer.  Electric guitar technology is now very mature so this could have been a huge topic.  My aim here however, is to offer an introduction to the technology as a starting point for aspiring electric dulcimer players and to help them avoid some of the common pitfalls.

what is an electric dulcimer ?

A pleasing quirk of the solid-body electric dulcimer is that, unlike an acoustic dulcimer where the vibrations of the strings resonate in the hollow body, the energy of the strings has nowhere to go.  This gives rise to incredible sustain, even more so than an electric guitar, as the dulcimer’s body supports the staff and fingerboard.

Coil pickups work by detecting the vibrating movement of the strings through magnetic fields created by the coils.  In a sense, this is a purer sound than that of an acoustic instrument.  Although electric instruments will all sound slightly different, depending upon their design and woods used, the detection of movement of the strings alone can give a pure tone – hence, they are well suited to using effects.

Picking or strumming an acoustic instrument ponticello (near the bridge) or tasto (over the fretboard) with give a brighter or more mellow sound, respectively.  In much the same way, the positioning of the coil pickup will significantly affect the tone.  A pickup near the saddle will sound bright with many overtones.  Similarly, a pickup far from the saddle will result in a mellow sound with more of the fundamental note.  Indeed, electric guitars usually have two (or more) pickups, placed near and far from the bridge and which are selectable whilst playing by a switch on the body.  Humbucking pickups have double coils to ‘buck the hum’ and cancel out interference or noise – especially, as the name suggests, mains hum.

As coils detect the vibration of (ferric) strings though a magnetic field, then the strings themselves need to be of the right material – plain steel and nickel wound steel strings are recommended. 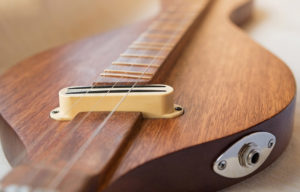 The electric dulcimer that I play has a single DiMarzio humbucking pickup, as far from the saddle as possible – to give a pure, clean tone.  There is also no switch-gear ‘on board’ as all my sounds are created using programmable digital effects.

This is where electric guitar amps come into their own.  Guitar amps are not acoustic amps and the two must not be confused.  Choosing the right guitar amp for you is key to achieving the sound you want.  Today there are a plethora of types and designs so I will mention but a few to give you taster.

One classic guitar amp is the Fender Twin.  It’s expensive and heavy but I mention it here as it’s famous for using valve technology to give an extremely clean and neutral sound.  By contrast most transistor amps especially, will have their own sound that adds character.  Each electric guitarist will favour a particular brand, whose sound they like.

Some guitar amps offer two channels which can be selected whilst playing, using a footswitch.  Typically channel 1 will give a clean, undistorted sound and channel 2 will be ‘dirty’, giving the option of varying amounts of distortion.  Channel 2 often has a boost or turbo feature, further exaggerating the overdrive or distortion.

Most guitar amps will feature an effects loop, letting the amp manage the preamp settings and the external effects manage modulations and delays.  Most brands have a practice amp offering too.  These smaller and inexpensive amps can be surprisingly loud but have limited features and are more crude of tone.

Mesa Boogie is a high-end brand favoured by famous guitarists and session players – because their products, as well as having rugged build quality, can give huge variety of tone.  Marshall amplification probably needs no introduction, as they offer a wide range of popular products to suit most budgets, some of which may stand taller than the player !

Guitar amp manufacturers are starting to incorporate effects into their products.  Famous for their effects, but newcomers to the amp market, are Boss.  Their Katana range of guitar amps have built in programmable effects, which can be programmed by a computer and even accept downloads from the Boss Tone Central website.  Katana amps offer great value with less to carry around but with ample variety of effects built in. 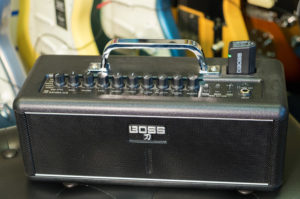 Highly portable and battery powered, the small Boss Katana Air boasts wireless connection to the instrument, a good variety of built-in effects with a big, smooth sound that belies its compact size.  It also has an acoustic instrument input and, although it’s not an acoustic amp, this feature seems to work reasonably well.

Most guitar amps are very efficient and deliver high levels of volume.  There will be times however, like playing in a band, when you many need to use a PA to balance the sound.  One popular and recommended way to work with a PA is to use a robust full-frequency dynamic mic (eg Sure SM57) and position this very close and at right angles to the guitar amp speaker but off centre, such that the mic is half way between the centre and edge of the amp’s speaker cone.

I’ve only mentioned four brands but there are many more and it’s a very personal choice.  Using a guitar amp however, is not the only option.  The multi-effects processor that I use has an option for output to PA (or acoustic amp) but still giving that rich electric sound.  This suits me well, as I’m primarily an acoustic player.

This section is necessarily even more subjective than amp choice, as each player will want to make their own unique sounds.  Anyone walking into a music shop selling electric guitars, will doubtless have seen the great variety of coloured foot-pedals to change the sound of your instrument and there’s virtually no limit to which you can use on an electric dulcimer.  More recently there are also even synth (synthesiser) effects that have been made to work with coil pickups without venturing into the world of midi.  Your electric dulcimer can sound like almost anything today – so where do we start ?

As in my previous article (part 1), let me group effects into 3 main categories, roughly following the groupings used by leading effects manufacturer Boss – and in the sequence they are normally used.

If you are using a guitar amp, then the preamp section will largely have been taken care of in the amp – you will already have set EQ and levels to taste.  I do recommend you experiment with overdrive (distortion) at least a little.  You may feel that distortion has no place in dulcimer music but some of the softer, valve-type distortions can be very sweet sounds.  There are also preamp effects that you won’t often find in guitar amps which change the ‘envelope’ or waveform of the sound.  Examples of these are compression (of the dynamic range) and (what Boss calls) ‘slow gear’ – a volume swell effect, like strings in an orchestra.

In terms of modulation effects: A chorus gives a cool, open sound, whereas a phase will give a warm, rich sound.  An octave divider can add bass tones into the mix and sound like an organ or a harmonist can play harmony notes to a pre-defined scale – eg 3rds in the key of D.  There are also flange, wah, tremolo and many others, which all shape the sound in different ways.  It’s not just a matter of taste though – some types of music suit some effects more than others.  Also bear in mind that this technology has been developed for electric guitarists in the rock world – so some of the effects work best with single-note lead playing.

At the end of the signal path, delays make the sound ‘wetter’ or ‘dryer’ to taste and very long delays can allow for dueting.  If you are using a guitar amp, it will probably include a reverb facility.  You could add a loop station to store parts of your song (eg chords) while you play other parts live (eg lead), building up layers of sound, potentially with different textures.  Furthermore, some effects can optionally be in stereo, giving options for routing the signal or presenting a stereo sound.

Here are a few examples of effect combinations I have used :-

… to mention just a few benefits.

So, if you are serious about effects, you will probably end up with a multi-effects processor.  They can be complicated however and it’s not just knowing how to do it things but what to actually do – the programming might seem a little daunting until you become familiar with it and a big part of the skill is knowing which sounds will work best.  For these reasons it would make sense for the beginner to start with a couple of individual pedals and get used to their sounds and settings first.  I recommend the brand Boss for rugged build quality and great sounds and, if you buy second-hand, you might get your money back later.  You might think about a chorus, a phase, an analogue delay and take it from there.  If you find yourself owning dozens of pedals including EQ, noise gate, tuner, power supply etc – you might have gone too far and would have certainly saved a lot of money and gain even more functionality with a multi effects unit. 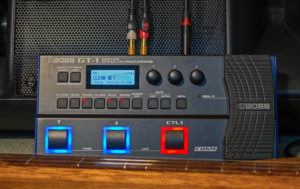 The Boss GT-1 multi effects processor offers a vast array of programmable digital effects in a compact, lightweight, battery-powered package, housed in a tough nylon shell.  At 24bit processing, the sound quality is excellent, as is ease of use when playing.  A tuner and a loop station are built in and the output can be set to be compatible with a PA or a variety of guitar amps.  Programming is comprehensive and routing options mean that effects can be placed in almost any sequence.  It can even make your electric dulcimer sound like an acoustic.

Electric dulcimers have coil pickups which give a pure sound, ideal for use with effects.  They need nickel wound steel strings.  There is a plethora of guitar amps on the market, all offering different facilities and sounds – but this isn’t the only way to amplify electric dulcimers.

Effects pedals work very well with electric dulcimers and the choice of sounds and permutations are virtually endless.  Multi effects units have many advantages over single pedals and may allow interface with PAs and acoustic amps.

I hope this article was helpful.  It’s a complex subject and I’ve only just scratched the surface but I hope it will help you get started.  I have not included a glossary of terms but will be happy to clarify anything to the best of my ability if you contact me.

You may find this You Tube film of me playing The Water Is Wide on my electric dulcimer with a variety of effects interesting (the You Tube notes explain which effects are used).