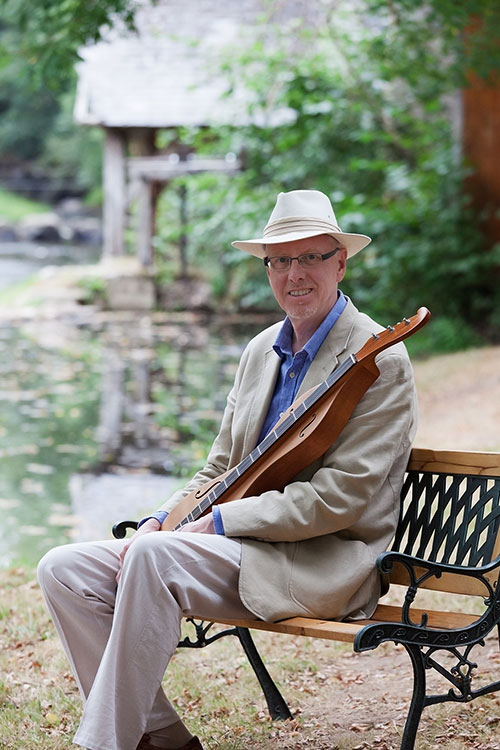 I first met Dan Evans at the Nonsuch Dulcimer Club’s annual weekend, at Launde Abbey, 3 years ago when I was starting out on dulcimer.  A very sociable and helpful guy, as well as a very thorough tutor, I was delighted when, last year, he came to teach at the Nonsuch Spring Fling in Allendale, Northumberland (which I now help Liz Conway to organise).

Dan began by telling me about his musical background:  I played mandolin in a school folk band and then at university jamming to Dylan, Lindisfarne & folk classics – I no longer play mandolin, the frets are too close together for me now.  I’m a guitarist – I play folk airs and original pieces in Open C tuning.

(Steve: have a listen to She Moves Through the Fair for a beautiful example).

I followed on from John Martyn (my favourite artist of all time).  For many years, I was the only guitarist I knew of who built up layers of sound with different textures using a coil pickup on an acoustic guitar – this was using sampling before loop stations existed.  I coined the phrase ‘electro-acoustic’ for this work but, sadly, that has become misused by manufactures to mean acoustic with pickups (almost all decent guitars have pickups now so the term is meaningless).

Today, I’m acoustic as the effects I use are now have 32bit processing and 96Khz DAC – so they work well with an acoustic pickup.

Steve:  Is that strictly acoustic then, as you are using a lot of electronic processing (not to mention a PA) ?

Dan:  I always plug in, even at intimate venues, to have control of the sound.  My dulcimers are rich and strong and my guitars (in Open C) very rich and strong on bass (like a baritone) but in order for the audience to hear that warmth and smoothness I have to plug in … plus every song has it’s own delay patch … plus there’s an electric dulcimer.

Steve:  What first drew you to the MD ?

Dan:  At the age of 15, I suddenly wanted to play music but had no music training whatsoever and was supposedly tone deaf – I missed out completely as half of my schooling was in France – I didn’t even know Every Good Boy Deserves Favour.  Classical instruments at the time seemed daunting to me, and a boy in the year above me at school had built an MD but with nylon strings – it looked nice but didn’t really work very well.

I then built 2 dulcimers at school with support from the woodwork teacher, who was a folk enthusiast and super guy – I still see him – good teachers are worth their weight in gold. Mine were the first instruments that played well and the whole school was buzzing after, making guitars and mandolins.  Mine still work to this day.  One was used on my first CD album and that track was loved by Stephen Seifert – so much so he played it as his first cut on his first internet show and said, twice, how much he loved it – proud of that. 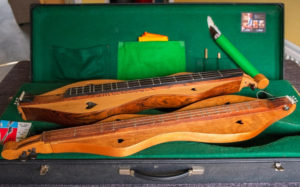 Steve:  Were these first dulcimers based on the John Pearse TV programme and books ?

Dan:  I remember the JP book but my father was a draftsman/engineer and there was a pro drawing board in my studio bedroom – so I used geometry for the fret positions and an hourglass shape – 3 string, no ½ frets.

Dan:  It was called Ionian then and I still prefer that term – typically I would be in or near the key of C, before my voice developed (typically key of E now) – then AAD became the ‘in’ term and now DAA – but my DAA is in fact EBB.

Steve:  Do you use a capo at all or just re-tune ?

Dan:  I’ve never used a capo on the dulcimer and doubt I ever will – I re-tune.  In concert I plan the programme to minimise re-tuning – but audiences are tolerant when it comes to encores – formality is put aside at that point.

Our conversation then side-tracked to a, hopefully, interesting discussion on tone-deafness …

A big irony in my life, but also a major source of income and massive transformation for me in so many ways, is that I was labelled tone deaf at school and told to mime in the school choir – then I went on to run voice workshops (this link is a brief synopsis of that work).

Steve:  I think we had this conversation earlier in person.  I too was labelled tone deaf in primary school and told to sit quietly at the back of the class.  As a result I hated music for many years.  But the melody and rhythms managed to find a way out – many of my ancestors were musical – and now you can’t stop me.  As a side thought on ‘tone deafness’, I still find it difficult to sing along with others if I can’t hear my own voice (and my voice is fairly quiet probably as a result of being chastised for it in my younger life).  Are you the same or are you now confident enough to sing with others?

Dan:  OK, there are several questions in here:

‘Tone deaf’ is a term used for those that struggle with singing in tune – many do but ALL can learn – I’ve had hundreds of tone deaf people come on my course only to find that they can sing perfectly well in tune with just a little help – our education system in my generation was a disaster in this regard.  In my experience (25 years, 6,000 students over 2 continents) there is no such thing as tone deaf.  My findings here marry with Howard Goodall’s insight that all children can learn to sing in tune, providing they are taught by someone who understands how children learn music.

It’s critical to hear your own voice when singing with others – and I understand how your past has made you tentative – however the technique is to sing strongly so you can hear yourself and then you’ll be in tune – being tentative hinders.

I am confident to sing with others, sing when I’m solo and take the lead more often than not with Rebecca on harmonies (Rebecca Hallworth, the vocalist I work with).

Steve:  How did you learn to play ? What tunes were in your initial repertoire ?

Dan:  My fist year was a nightmare.  With no music education, I had to find out by trial and error what strings to use and how to play.  A year later I taught myself classical mandolin from a book and that helped a lot – I could read a little music now and was comfortable with strings and frets.

Another year later, I bought my first guitar and within a couple hours was playing fingerstyle in open tunings – music was hobby for me for in those years.  Then, with little experience, I jumped in the deep end and turned pro as a folk guitarist in ’92 and played clubs and festivals in the UK – frankly with mixed reactions from the audience – the folk world didn’t really get me then and still doesn’t, by and large.

I stumbled upon Roger Nicholson’s recordings and books at some point and met him too at that time – so I learned many of his tunes and still play some today.  His original mock-Elizabethan pieces and transcriptions of old lute tunes are second-to-none and have yet to be surpassed on the dulcimer and I doubt they ever will – at that time I had no idea that we were to work together.  See more on Roger Nicholson on this blog.

Steve:  Are you still actively learning new stuff? What tunes are you currently playing or learning?

Steve:  How would you describe the type of music that you play ?

Dan:  Fingerstyle, original plus some folk played in a classical style.

At this point, Dan kindly sent me notation his new arrangement of Banks of the Lee.

Steve:  Do you play mainly (or only) in one tuning?  Which tuning(s) ?

Dan:  No, lots of tunings but never DAD – my dulcimers have 3 strings and no ½ frets.  I play in Ionian (DAA or more likely EBB), Dorian (EBA), Aeolian (DAC), Bagpipe (BBB, CCC), reverse Ionian (CCG, BBF#) and some other tunings I’ve stumbled across.

Steve:  Do you play with others – i.e. other MD players or mixed instrument groups ?

Dan:  See my duo/trio on this page on my website and the ‘3 guitars’ concept too. 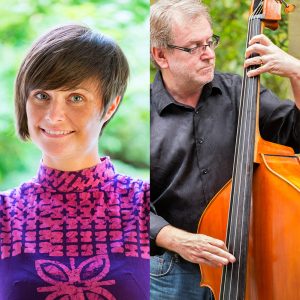 On several of my CDs we have used classical guitar to complement the dulcimer.  The softer tone of the guitar marries with the crisp sound of the dulcimer and the guitar, played at first inversion – or root chords – adds body and warmth to the dulcimer playing inversions of chords up and down the fretboard – plus you can pan them left and right to get a great sound.

And this might develop into something one day (link to a film of dulcimer and poetry).

Steve:   What is the music scene like in your locality ?  Where do you play (i.e. at home, friends’ houses, pub, coffee shop, etc) ?  Are there many other MD players near you ?

Dan:  Lots of ‘open mic’ in pubs.  A few MD players in London but not many close by.

Steve:  A lot of MD players seem to collect instruments.  Do you wish to admit to Dulcimer Acquisition Syndrome?  Please describe your favourite (or only) instrument.

Dan:  Not at all – they take up space and cost money to insure and on strings and repairs – I only have what I need: two acoustic dulcimers in different tunings with different strings to match and one electric in DAA.

My current acoustic dulcimers both have 3 strings, diatonic fretting (no ½ frets) and with L.R. Baggs saddle-type transducer pickups:

A Martin Cole custom – now in Cornwall, UK.  This is extremely light – so much so that it shocks folks when they hold it – and sounds terrific.  I used this for Bagpipe, Reverse Ionian etc – but it will serve other tunings if I need it to.  It was my main dulcimer for 20 years and has travelled a lot, though I don’t fly with it now.  It’s so light, it wobbles about on your lap – but it proves that most dulcimers are massively over-engineered and far too heavy to sound good.

And a Doug Berch custom – based in Michigan, USA – this is a very nice-sounding dulcimer and now my main instrument.  The head is de-coupled from the staff and that, with some other mods, make it responsive for fingerstyle playing.  Stephen Seifert said it suited me well when he attended my Nashville concert last year.  I keep this in Ionian/EBB for access to Dorian/EBA, Aeolian/DAC, Bagpipe/BBB – it can also manage reverse Ionian/BBF# and, if needed, DAA.

I also have a solid body electric in DAA made by local luthier Andy Viccars.

You can find out more about Dan’s instruments, CDs, gigs and teaching on his beautifully designed website.

Following our conversation, Dan jotted down a few thoughts on his approach to dulcimer playing and DAA tuning in this blog post.