Dan Evans: A Musician for all Seasons

Close your eyes and imagine mountain dulcimer history and the pros who play these beloved instruments on this side of The Pond. Now, open your eyes and meet Dan Evans, the UK’s premier English dulcimer player.  Dan shares his unique perspective on our beloved instrument and his history as a musician and composer. He returns to the United States in June for another international tour, starting with a concert for the players and friends of The Grand Old Dulcimer Club in Nashville.  So, sit down with a cup of tea and enjoy a bit of his story.  You’ll discover Great Britain’s leading dulcimer musician offers plenty to inspire beginners as well as advanced players and teachers.

You use the term ‘English dulcimer’ to describe your playing style.  Would you explain that term for your U.S. readers?

I play fingerstyle almost exclusively and my repertoire, aside from original material, largely draws on folk songs and tunes from the British Isles.  I also think a phrase I use: ‘English fingerstyle dulcimer and guitar’ comes from guitarists like the virtuoso British player Martin Simpson.  The only training I’ve ever had on instruments is 15 minutes with Martin.  He showed me best-practice right hand technique and so transformed my playing.

You compose as well. How does a composition start for you, and where does your desire to compose take you as a musician?

I feel a strong connection to and inspiration from the natural world.  Indeed, a number of my compositions are for and about nature, like my piece ‘Le Ruisseau Du Moulin’ (The Mill Stream) which you can watch on my YouTube channel and listen to in the CD that accompanies this issue of Dulcimer Player News.  In the real mill stream, water tumbles over rocks and stones to make a babbling brook.  So, I looked for musical phrases that might suggest that pattern of movement for my piece.  Likewise, in my most recent composition ‘The Dance Of The Falling Leaves’, the quirky rhythm is suggestive of the idiosyncratic way leaves fall in autumn.  There’s always a connection of some sort in my brain between the two. I don’t expect other people to see the connections, but they usually do.

Some readers will know that I’m a retired commercial photographer, although I still enjoy taking landscape photos.  From contacts in the music industry, my images have appeared on album covers as diverse as the Debussy Ensemble and Nashville country productions.  Combining my images with my own music has been a challenge, but I’m getting there.  The cover of my last album is illustrated with photographs that I took of the old French water mill where my Mill Stream piece was composed.  A number of films on my YouTube channel incorporate my images to enhance the listener’s enjoyment.  I also have ideas to make a real multi-media film using photographs and nature music – that’s for the future.

You also play guitar; was that your first instrument on your road to becoming a musician?

Actually, the dulcimer was my first instrument.  I’d had no musical training whatsoever but I was good at woodwork.  When I was 15, a boy in the year above me at school had built a dulcimer with nylon strings.  It looked great but didn’t play well. I wanted to start to play music but on a simple instrument.  So I built two dulcimers.  At the time I had no books or help of any sort and really struggled to get started. I couldn’t hear pitch well, didn’t know what to tune to or which strings to use; I was lost for some time.

A year later however, I bought a mandolin and taught myself classical technique from a book, began playing in a school folk band and composing music too.  One tune I wrote at that time was repeatedly played on BBC local radio.  I was 16 years old and very, very inexperienced.  It felt surreal to hear myself broadcast and some folks didn’t believe it was my music.  On my 18th birthday I pooled all my pocket money and bought a nice guitar cheaply because it had a split bridge, which I knew I could repair.  I had to walk seven miles home with a big cardboard box because there was no money left for the bus ride home.

I played guitar a lot during my university years and friends soon said that I had a gift for music.  That wasn’t true — I struggled terribly — but I was driven.  My gift, if you can call it that, was motivation.  I played up to six hours a day until my fingers bled.  On one occasion at university I played a piece I had just composed to a professional guitarist of several decades but I’d only been playing about 18 months.  After hearing me play, he told me that he would not expect to become that good a player in his lifetime.  That gave me a sense of responsibility to share my music.

I left with an honours degree in Botany from the historic and distinguished University of Durham in the north of England.  More importantly I left as a consummate guitarist, albeit in my own style.

What kind of dulcimers do you own?  What factors determine which dulcimer you will play in a given context?

All my dulcimers have only three strings and a diatonic scale because I play in DAA mostly, although not always in the key of D.  They need to be responsive for fingerstyle playing and all have pickups for concerts.  Each has its own qualities and I generally use two in concerts to give variety of tone and key.

About 20 years ago Martin Cole, a guitar maker in Cornwall, built me my first professionally made dulcimer in mahogany after a design by Stephan Sobel (an excellent luthier in Northeast England who no longer makes dulcimers).  It is loud and responsive with a bright, clear tone and is simply the best sounding dulcimer I’ve ever played.  I use it for songs and tunes in EBB (Ionian), EBA (Dorian) and BBB (Bagpipe) mostly.

My second dulcimer came ten years later, a Blue Lion Type II in rosewood.  I use this for songs in DAA. It has a warm, mellow tone.  More recently, Doug Berch made me a bespoke dulcimer in black walnut.  I use the Berch dulcimer as an alternative to the Cole.  It is similar in sound but it’s easier to play as it sits on my lap more stably.

Lastly, Andy Viccars, a local luthier, made me a solid body electric dulcimer in mahogany with a humbucking coil pickup.  I play songs and tunes in DAA on this dulcimer and the coil signal is processed by a leading multi-effects guitar processor to give an extensive variety of sound textures.

Many beginner players of the mountain dulcimer use DAD tuning.  What draws you to DAA tuning? If one wanted to explore DAA tuning, would it require a change of strings?

I started with DAA tuning.  London’s Roger Nicholson used DAA tuning for his music so I began with his tuning and I’ve never felt a need to change.  I feel DAA is hugely misunderstood and hugely under-rated.  I use it most of the time and it has many advantages.  I accompany songs in DAA by arpeggiating chords and I play folk melodies as instrumental airs.  Both these methods have been developed over many years.  Combining them allows me to accompany songs with beautiful introductions and/or interludes and/or outros.  A good example of both these methods is my arrangement of Richard Thompson’s ‘Farewell, Farewell’ that features the lovely English actress Rebecca Hallworth on vocals (also on my YouTube Channel).

If you use DAA tuning it’s best to use a heavier string for the melody, the same as middle string and you don’t need any ½ frets.  For me the ½ frets ruin the instrument.  I not only don’t want them, I can’t play a dulcimer with them.  For me the fun and challenge of playing the dulcimer is to make meaningful and even moving music on an instrument with only three strings, with half the frets (seemingly) missing. 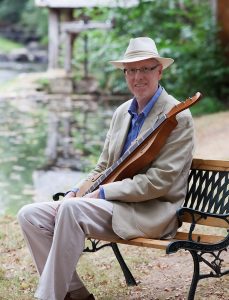 As an internationally recognized musician, what are your aspirations and challenges for the future?

I want to compose more nature pieces and to record again.  I love working in the studio and, while I am able, to share my music as much as possible.  I enjoy performing and entertaining and I can be funny too.

My biggest challenge is the high cost and hassle of air travel.  I often need to travel to the US but flying with instruments is very challenging, not to mention that I’m extremely claustrophobic.

You are friends with Stephen Seifert, a mentor to the Grand Old Dulcimer Club in Nashville.  How did you first meet Stephen?  What have you learned from him?  What do you think he’s learned from you?

I first met Stephen at Kentucky Music Week in 2000.  I was blown away by his virtuosity and versatility.  The following year I roomed with him at SAMFest in Texas and we have met many times since.  We recorded a couple of duets together in 2014 in a small but award-winning studio in Nashville.  Those duets are highlights of my ‘Au Vieux Moulin’ album.  He’s an inspiration to me.  I know he likes my playing too and I’m proud of that.

You teach as well … what methods, techniques or activities do you return to over and over to motivate your beginning students?  What activities or practices are absolutely vital for your intermediate and advanced students to help them gain confidence as players and to make meaningful connections with music?

I try and teach holistically – music is more than just the dots on the page; it’s what’s in your body, mind and heart too.  To that end I often focus on posture first.  Humour in the classroom can help to lighten the mood too.

I’m also focusing a lot these days on best-practice in whatever techniques are being taught. I’m very happy for students to develop their own style.  Indeed, one of my training principals is that there is no ‘correct’ music – but I advocate to learn best-practice technique first, then to innovate.

In my mind there are no poor students, only poor teachers.  As a child I was told to mime in the school choir both in France and in England.  I probably was singing badly as I had not been shown how to do it correctly.  Apparently, the fault was mine.

Criticism invariably erodes confidence and it also damages the trust between the teacher and student.  When you realise that criticism serves the needs of the giver and not the recipient, then it has no place in the classroom.  Confidence is developed by a non-critical ambience and positive reinforcement.

In your opinion, what can we dulcimer players do to promote the dulcimer?

I’m hoping someone in the dulcimer world – one of the great players – will break through to mainstream entertainment, like what David Schnaufer achieved.  I’d like the world to see the instrument played really well.

Dan Evans makes a return visit to the United States in June of 2018.  After his concert for Nashville’s Grand Old Dulcimer Club at Vanderbilt University’s Blair School of Music, he’ll head to Bardstown to teach for a week at Kentucky Music Week, then finish his tour with a workshop and concert for the Louisville Dulcimer Society.  More information on his Nashville concert along with links to Dan’s webpage and Youtube channel is available on our website: thegrandolddulcimerclub.com under the pages ‘Friends of the GODC’ and our Calendar page.

The music Dan Evans brings to this issue of Dulcimer Player News to accompany this article is a recording of the minimalist piece ‘Le Ruisseau Du Moulin’ (The Mill Stream), played in Bagpipe tuning (BBB).