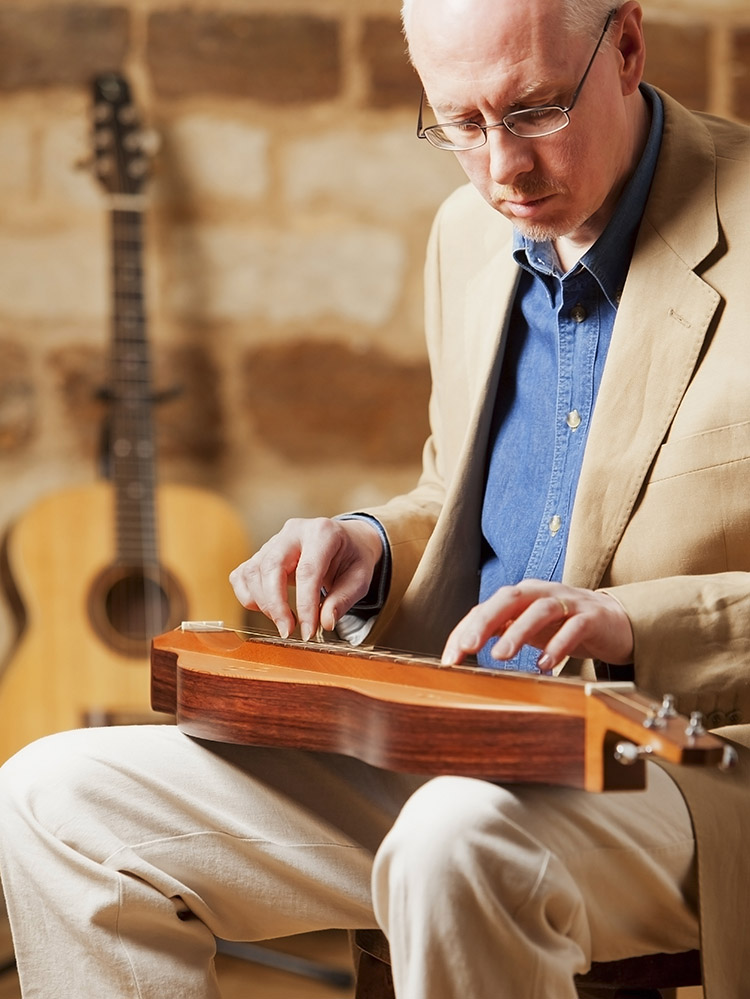 I stumbled across this interview for Unicorn folk magazine (UK) in my files today.  My wife and I met the editor: Simon Bailes, while we were on holiday in the Lake District in May 2014.  Simon was working away from home nearby in Cumbria at that time, so we met up and shared a meal together.  Following this acquaintance, Simon both interviewed me for Unicorn and, later, reviewed my Au Vieux Moulin CD, which was in the making at the time.

A native on the northeast, Middlesbrough, to be precise Dan Evans has lived in Olney, Buckinghamshire for the past twenty years.  During more than thirty-five years as a performer Dan has developed his own style of fingerpicking on both the guitar and mountain dulcimer.  Since making his first dulcimer, at the age of fifteen, whilst at school Dan has become the UK’s foremost dulcimer player, having toured both the UK and USA.  Influenced by luminaries such as John Martyn, Gryphon and The Pentangle, Dan has recorded four CDs and a fifth is in production.  He also teaches guitar, dulcimer and singing.

Having cut his teeth in the UKs folk clubs while still holding down a proper job, Dan became a professional musician in 1992 primarily as a guitar playing singer.  Over time, however, he developed the dulcimer content of his performance until the dulcimer became his primary instrument.

Dan’s first four albums are a collection of instrumental and vocal tracks covering well known tunes, self-penned items and other traditional titles.  I like the simple nature of the dulcimer, brought to life by Dan’s playing supporting his confident baritone voice.  He often collaborates with other musicians on these recordings to give a varied tone picture.  If you haven’t come across Dan’s CDs they are well worth a listening to.  They are available on iTunes and Amazon as well as directly from Dan on his website.

Recording for Dan’s new and fifth CD entitled Aux Vieux Moulin is underway, inspired by an old French water mill that he recently stayed at and the time he spent in France as a child.  The new CD will include some recently penned French tunes along with some English and American songs and tunes.  In collaboration with international jazz bass player & guitarist Andy Crowdy and actor & singer Rebecca Hallworth Dan has recorded some of the tracks with the remaining to be recorded then mixed during the spring and summer.  Dan has a summer tour to Kentucky and Tennessee where he will record the final tracks for the album in Nashville with American dulcimer virtuoso Stephen Seifert.

Another of the strings to Dan’s bow are the workshops that he leads on singing and performance techniques.  Dan’s philosophy follows that of the Chinese proverb that teachers should open the door, but the pupil must enter of their own accord.  He is careful to avoid criticism but instead builds upon the energy of the music, feeding on the creativity of the individual singers.  He creates a supportive atmosphere where singers of all levels are able to bloom and develop their confidence, thereby developing their singing talents.

What struck me most when chatting to Dan was his energy and enthusiasm for what he was talking about.  When you discuss something with someone who is so obviously passionate about the subject their enthusiasm is infectious.  I only talked to Dan for an hour or so but came away wanting to sing all the way home, to grab my guitar or my accordion and practice for five or six hours a day that Dan says he practiced to develop his completely self-taught style.  Some people have the ability to enthuse others with their positivity.  Dan has this in bucket loads.  I haven’t been on one of his singing workshops, but I intend to book one this year (if there are spaces – there are often waiting lists). To top it all off, Dan is a nice chap.