my approach to the dulcimer

my approach to the dulcimer

my approach to the dulcimer ~ or why I play in DAA

I am often asked why I play mostly in DAA, rather than today’s more dominant DAD tuning.  Whilst I enjoy many benefits from DAA, and there are many, the real reason is not just about the pros and cons of DAA vs DAD, but about the configuration of the instrument itself.  This article aims to explain that configuration and thus the approach I have to the dulcimer.

It was back in 1972 when I first saw (what when we then called) the Appalachian dulcimer.  At that time the instrument typically had an hour-glass shape but more importantly, it had 3 strings and a diatonic fretting pattern (ie no ½ frets).  My first dulcimers followed this configuration, as do my dulcimers today.  The late, great Roger Nicholson was my main inspiration when I started out and his dulcimers had that same configuration too.

Ionian mode, now called DAA, but typically then in (or near) the key of C (CGG), was the tuning used at that time to play major scale pieces.  To this day DAA, but more commonly for me in the key of E (EBB), is the tuning I use most for the major scale.

Following on from Roger’s great work, I also use modal tunings to access the minor scales.  This is one of the most powerful and versatile aspects of the dulcimer, as each modal tuning evokes a distinct and different mood.  Tuning to the different modes results in the correct drones for that mode and thus presents a stronger sense of atmosphere and modality than anything I’ve heard played in DAD.  Moreover, tuning to the different modes does not require any ½ frets and, as well as conveying different moods, each modal tuning gives access to different accidentals (out of scale notes) on the middle and bass strings.  My piece Etude, in the Aeolian mode (DAC), was written to illustrate this very point and is littered with accidentals without using any ½ frets.  The TAB for Etude can be found here.

As well as Ionian/DAA, modal tunings and Bagpipe, I’ve stumbled across a number of other tunings, all of which support the major scale.  Perhaps the most successful of these is what I call Reverse Ionian (CCG or BBF#), which I use for one of my train tunes: Bullet Train.

To illustrate this important aspect of the diatonic dulcimer, my 2014 album Au Vieux Moulin features no fewer than six different dulcimer tunings.

Having only 3 strings allows me to play fingerstyle cleanly and expressively.  Decorations, slides and vibrato are all more precise without paired strings.  Furthermore, tuning and re-tuning the instrument is easier, faster and more precise with single strings.

A true diatonic fretting pattern is even more important to me for several reasons – here are just two:  Firstly, unlike the guitar, there is no need for inlaid marker dots, as the diatonic pattern shows clearly where you are on the fingerboard at any one time.  Secondly, the diatonic pattern gives a very strong visual reference for the DAA chord shapes I use.  Each chord family (major, minor, 7th etc) has several, unique chord shapes, each of which will always result in a chord of the same family.  The diatonic pattern is lost when additional frets are added and so the visual reference disappears.

The desire to play more styles of popular music seems to be the key driver for adding extra ½ frets, but I personally feel that misses the point of the dulcimer.  Every instrument has it’s limitations and, for me, the key to working within the limitations of the diatonic dulcimer is to either play music that suits the dulcimer or is composed specifically for it.  If I wanted to play jazz, I’d probably do that on guitar.  One of my recent compositions for the diatonic dulcimer in Ionian tuning, in this case in key of C (CGG), is called Tumbling Skies.  You can see a film of me playing Tumbling Skies and also access the TAB notation here.

summing up & a thought to the future

In the past few decades I’ve been exploring the vast potential of this dulcimer configuration with original compositions, modal music and arrangements of traditional folk songs and airs.  I even play a Beatles song and an ABBA tune on the dulcimer as well as a few other popular classics.  One of my recent dulcimers is a solid-body electric and this hugely lends itself to tonal modification using digital effects.  These arrangements of The Water Is Wide demonstrate just a few of the soundscapes possible with an electric dulcimer.  I also use more subtle delay effects on my acoustic dulcimers to gently enhance the tone and richness of the sound.

All being well, I hope to continue to explore the vast potential of this beautiful instrument and experiment with new material, techniques and technologies – but almost certainly using the original, and authentic, configuration.

I shall be telling this with a sigh
Somewhere ages and ages hence
Two roads diverged in a wood, and I
I took the one less travelled by
And that has made all the difference
Robert Frost 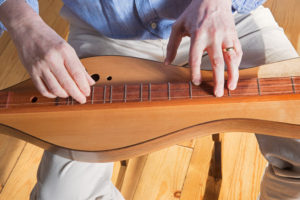