inspired by a stay at an old water mill in France where the tile track was composed, Au Vieux Moulin (2014) is my favourite and most popular CD to date – with only a little guitar, this album is a showcase for the fingerpicked dulcimer, featuring pieces from medieval to modern music in a variety of different tunings – especially important are four new minimalist pieces for the dulcimer, including the title track Le Ruisseau Du Moulin (The Mill Stream)

my own photography of the French mill illustrates the luxury card packaging & booklet – JP reviewed it for Acoustic Magazine: “an astonishing variety of tunes and soundscapes – gifted with seemingly limitless imagination – it’s all incredibly pure and all incredibly beautiful “

Let It Be Me (2010) took a slightly different direction – this acoustic & very natural recording presents arrangements of folk songs & tunes on dulcimers with occasional guitar – harmony vocals by Hilary Davies, violin by Sylvia Seaton, string bass & classical guitar by Andy Crowdy complete the accompaniments – recorded at the Salvation Army’s World Of Sound studios in Wellingborough and produced again by Russ Dawson Butterworth, who now is gaining in reputation as a TV sound producer – beautiful photography by my late friend Martin Plant compliment the attractive packaging in a modern digipack (card CD case)

Neal Walters reviewed it for the international Dulcimer Players News magazine: “the new recording focusses on Dan’s clear and precise dulcimer & guitar playing along with his superb vocals – I am gobsmacked by Dan’s amazing ability to provide such compelling and lyrical accompaniments to his singing” 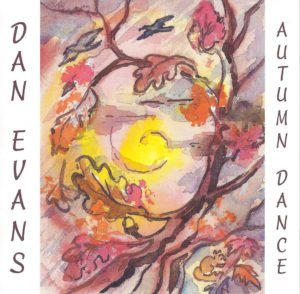 completing the Spirit Dancing trilogy, Autumn Dance (2002) is my second favourite CD overall and the one I was most prod of at the time – this is a nicely themed folk album with a mixture of dulcimer and guitar songs and tunes – it also features my unique electro-acoustic guitar with sampling and effects – Ruth Cohen Rose takes lead, harmony & ambient vocals, Sylvia Seaton plays violin and again Martin Vishnick, John Ward & Andy Crowdy play classical guitar, bodhran and bass respectively – again, recorded at The Old School Studio in Peterborough but this time produced by Russ Dawson Butterworth

mastering was done in Keighley, Yorkshire by Jon Blamire at The Digital Audio Company, where Paul Mc Cartney was working on his Oratorio project at the time (Jon said he would play Paul my version of Let It Be – I hope he liked it)

Jane Muir created the original artwork and Theo Thomas reviewed it for the Unicorn folk magazine: “this album features once again Dan’s amazing talents on electro-acoustic and acoustic guitars and Appalachian dulcimer – Dan’s mastery of his instruments and the electronic effects he creates though sampling, coupled with his sensitive and modal accompaniments create a unique and distinctive melodic sound throughout this album – recording is quality is first class as one would expect and the album as a whole is superbly and professionally packaged” 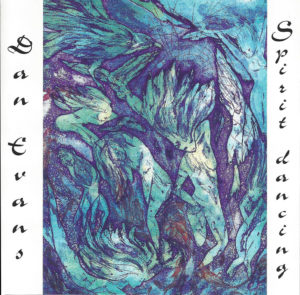 my second CD, Spirit Dancing (1997) was released just in time for my first US tour with the late, great Roger Nicholson – Roger guests on the album, where we play a couple of dulcimer duets – for the first time my dulcimer music is featured equally with my guitar – this album holds a mixture of folk songs and tunes on acoustic instruments with varied accompaniments – Elaine Samuels sings harmony to my vocals and Natasha Briant plays a little cello – classical guitarist and close friend Martin Vishnick supports my dulcimer nicely, there’s percussion by John Ward and, for the first time, superb bass by Andy Crowdy

it was recorded at The Old School Studio, Peterborough and produced by Mat Parkin, who went on to be classical music specialist at BBC Scotland – the lovely cover etching, this time by Karen Jones, suggested the title – Alan Hibbert reviewed it for Folk In Kent magazine:  “unquestionably Dan Evans is one of this country’s most accomplished performers of both acoustic guitar and dulcimer – he also has a fine voice and is a skilled songwriter and arranger” 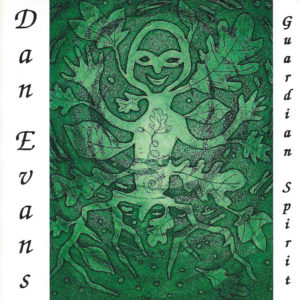 Moni Aldous reviewed it for Essex Folk News: “a consummate artist who presents us here with a superbly professional and polished recording – Evans’ unique instrumental artistry is the outstanding feature of this recording – buy it, listen to it, be uplifted”

now with professional distribution globally, you can hear samples and purchase in various formats here 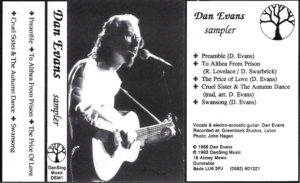 this first product on my own record label, DanSing Music, was recorded at Greenbank Studio, Luton by Doog Moody – this 5-track cassette was originally produced as a demo – it was repackaged and renamed Sampler for me to have a product to sell when I turned professional in 1992 – it served me well for the short time is was released and attracted one of my favourite reviews: “Dan Evans is bit of an enigma – at first he comes on all pastoral and acoustic, then turns all that on its head with electro-acoustic effects that wouldn’t seem out of place at a Hawkwind gig – he is also a classy acoustic guitarist in the Renbourn mould and has a voice not dissimilar to Martin Carthy”  Rock R Reel magazine 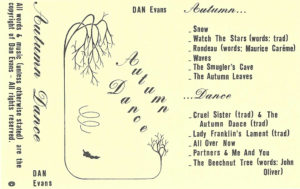 Autumn Dance (c. 1990) was perhaps the best of my personal home recordings as it featured the breadth of my music to date, including original, nature-themed instrumentals, arrangements of traditional folk songs and my unique electro-acoustic guitar work – unbeknownst to me at the time, it became a template for my professional Autumn Dance CD album, released much later in 2003 – again totally home-spun, the recording, artwork and design were all done by myself 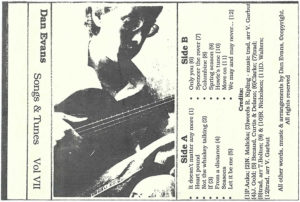 In hindsight, I’m not really sure why I made these simple but pleasing home recordings (all seven volumes of them), as only a few copies were made and they were not released to the public – they did however serve a number of useful purposes – they created a record of my music, before I started using notation, and they prepared me well for the professional recordings I was to make later on – totally home-spun, the recording, photography and (analogue) graphic design were all done by myself