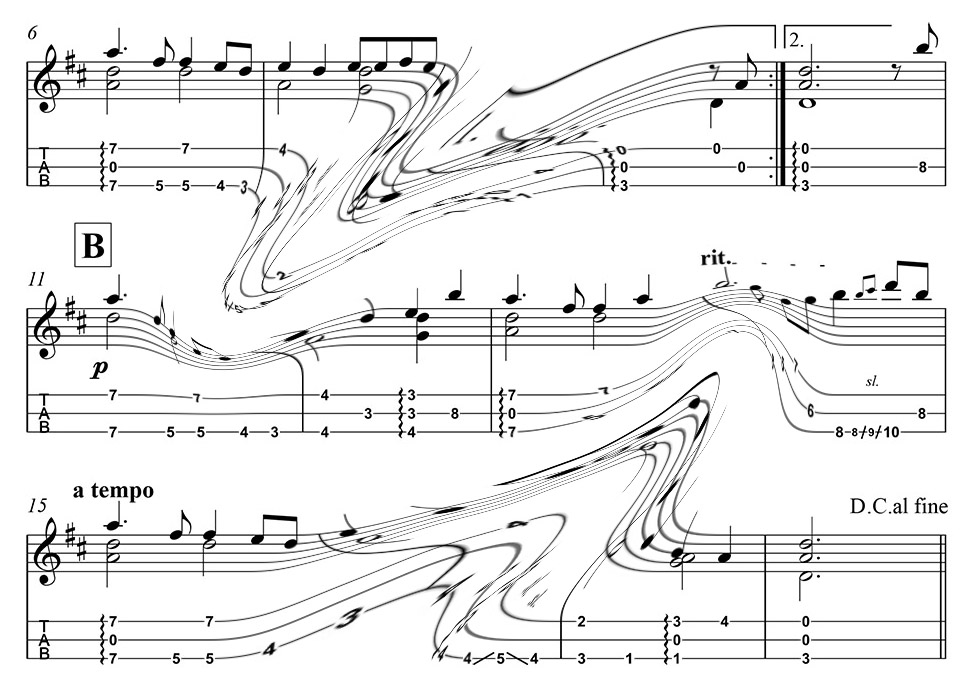 the difference between rhythm and timing in music

In music, timing and rhythm are two completely different things.  This issue has cropped up a few times on my workshops, so I created this blog post to help to explain the difference between two.  Clarity for me came when I considered the difference between a timing change and a rhythm change within the same piece of music.  So, as well as defining the terms, I have included in this blog examples from my dulcimer repertoire of both type of changes.

Rhythm could be defined as the pattern of the music in time.  It is not the up-and-down pitch sequence of the melody, but the relative duration of the notes (melody and harmony) that gives a piece it’s rhythmic pattern.  Maintaining the pattern of the rhythm is essential to the correct playing of the piece.  I often say in workshops that the integrity of the music lies in the rhythm.  It may be deliberately changed, but it should not be broken.

Although confusingly called ‘time signatures’ the number of beats in a measure (bar) is fundamental to the rhythmic pattern.  As such, a common-time piece in 4/4 signature will have a different feel, or lilt, compared to a 3/4 waltz or a 6/8 jig for example, regardless of how fast or slow the music is actually played.

Timing in music has several meanings.  For ensemble players, it can mean synchronising the various parts such that they are played together at precisely the same moment in time.  Timing can also refer to the speed at which the music is played, normally referred to as ‘tempo’.  Just as the rhythmic pattern can be changed without affecting the tempo, then the tempo can be changed for expressive effect without affecting the rhythmic pattern of the notes.

I occasionally change the rhythm within a piece of music and sometimes play the same melody but with a different lilt.  These changes are clearly and precisely documented in the notation to show how the piece should be played.  The listener will respond differently to different patterns in the music and changes in the pattern within the same piece can add interest to help to hold attention.

This simplified version of my Dance Of The Falling Leaves piece can be played with a pick in Ionian/DAA or Bagpipe/AAA tunings.  The illustrations show both the first line of the A part and the first line of the B part.  The rhythmic pattern for the A part might be spoken as “da da da deee di”, whereas the B part pattern might sound like  “daa d’da deee di”.  This rhythmic change adds variety and interest to the piece.  In both parts however, the tempo is the same.

For solo players especially, changing the tempo, by speeding up or slowing down, can add expression to certain parts of the music.  It is common to slow down at the end of a piece for dramatic effect.  This is often notated in the form of the instruction ‘rall’, which is short for rallentando, meaning to reduce the tempo or slow down.

Timing variations are frequently made in songs, for expressive effect or to allow the words to fit the music.  This is often referred to as ‘rubato’, which means a general flexibility (expansion or compression) of the tempo over the whole piece.  Fermatas in music are notated as a dot with an arc over them.  They instruct that a specific note should last longer than indicated, left to the interpretation of the performer.

It is also common to momentarily slow down and then revert back to the original tempo.  This is normally notated as the instructions ‘rit.’, then ‘a tempo’.  Rit being short for ritenuto, or to hold back and a-tempo, meaning to revert back to normal pace.  This device emphasises the slowed-down passage by giving the listener more time to appreciate it.

This extract from my dulcimer arrangement of the song Let It Be Me, shows two timing variations.  In measure 13 ‘rit.’ indicates that the phrase ”what would life be ?” should be played more slowly.  Then the normal pace is resumed for the next phrase in measure 14 by the instruction ‘a tempo’.  The fermata over the word “be?” at the end of measure 13, means that this note is to be held for as long as the singer chooses, typically about twice the duration indicated.  Both these devices stress the phrase and help to communicate the meaning, in this case, of the song.  But they can also be applied to instrumental music.

I have only included two examples here, because this is not a definitive article on rhythm or timing.  Nonetheless, I hope they clearly illustrate the difference between rhythm and timing in music.