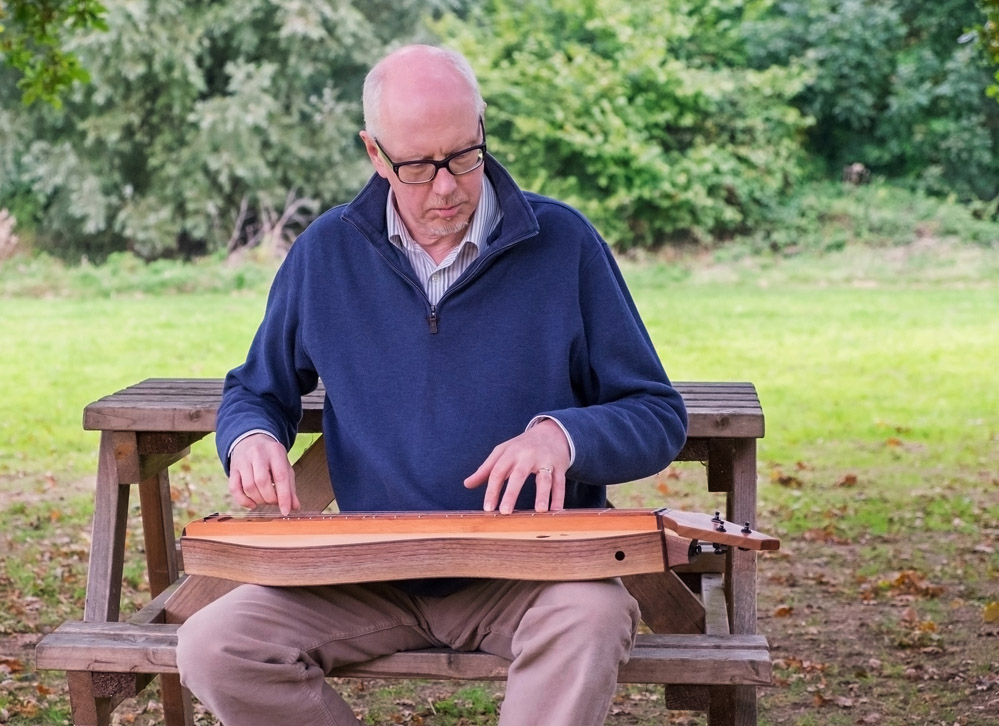 “What is a dulcimer ?” is perhaps the question I’m most often asked – this blog aims to answer that question and to give a little background to this charming instrument, as well as my own approach to it

the dulcimers that I play are members of the zither family, not to be confused with the hammered dulcimer, which is a trapezoid-shaped percussion instrument

back in the ‘70s we used the term Appalachian dulcimer, but mountain dulcimer is the most common name used today – a few players also call them lap dulcimers and some call them fretted dulcimers – I simply call mine dulcimers

historically, zithers were widespread in northern Europe, such as the Dutch hummel, the Islandic langspil, the German scheitholt and the French épinette des Vosges – all of which bear remarkable similarities to the modern dulcimer

the dulcimer in its current form took shape in the Appalachian mountains, following the settling of European immigrants – hence the name Appalachian dulcimer – many players in the USA are proud of the dulcimer’s American origins 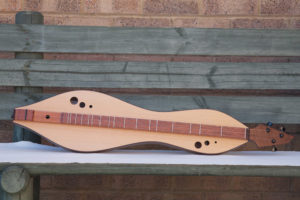 the traditional Appalachian dulcimer had an hourglass sound box with heart-shaped sound holes – it had three strings stretched over the length of the body, tuned using pegs in a scroll head, like a violin – characteristically, the Appalachian dulcimer had a diatonic fretting pattern – that is to say there were frets missing compared to a guitar, which roughly correspond to the back keys on a piano

the modern mountain dulcimer typically has 4 strings in three sets, with the melody string being paired – it also has one or more extra frets

whilst much of my music is original or contemporary, all my dulcimers share the authentic configuration of only 3 strings and no extra frets – but I also have modern guitar tuners and pickups to amplify the sound

personally, I play almost exclusively fingerstyle, that is to say I fingerpick or pluck the strings with my right hand using manicured nails

traditionally played in melody-and-drone style like the bagpipe, more adventurous players today fret all three stings to embrace a wider variety of music – this is an example of me playing an original dulcimer piece in a contemporary style

the dulcimer is a quiet instrument with a crisp, delicate and sweet sound – one of its many appealing qualities is that it is ideally suited to modal music and, by tuning to different modes, the dulcimer can evoke a strong sense of the past – this is me playing a traditional Irish folk air in the Aeolian mode 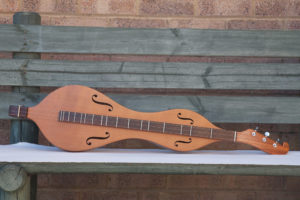 Dolly Parton and Joni Mitchell are well-known for playing the dulcimer – other famous names who have used dulcimers include The Rolling Stones, Cyndi Lauper, Steeleye Span and The Pentangle

the late American folk singer Jean Ritchie did much to popularise the dulcimer, as did master dulcimerist, the late Prof. David Schnaufer – I am proud to have met both of these legends – I gave a concert in Jean Richie’s honour in London, a year after her passing and here is a film of David and I working together at the Kentucky Music Weekend festival in 2000

London’s Roger Nicholson, also sadly deceased, was a hugely influential dulcimer player, composer and arranger of early music for the dulcimer – Roger & I toured together and he is featured on my second CD album, Spirit Dancing

David Shnaufer’s protégé, American dulcimer maestro Stephen Siefert is a hugely popular performer and teacher at dulcimer festivals today – Stephen is a guest artist on my Au Vieux Moulin CD and he joined me for my concert in Nashville

as you might imagine, the niche circuit of the dulcimer is a small world and pretty much everyone knows everyone, else I might not have had the pleasure and privilege of meeting these wonderful dulcimer players