what makes a good dulcimer ? 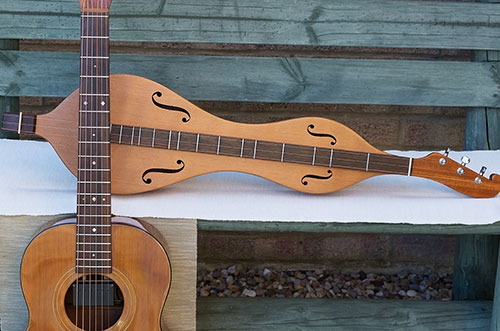 what makes a good dulcimer ?

If you go to a dulcimer festival today, you will doubtless see many variations of design to try to get the best sound from the mountain dulcimer.  So which attributes contribute to the quality of tone and what makes a good dulcimer ?  This article may be of interests to guitarists also.

If you are familiar with my music you will know that I’m also a guitarist and I play both guitar and dulcimer almost exclusively fingerstyle.  In over four decades of playing, I have built, commissioned and/or owned 5 guitars and 7 dulcimers.  This article is naturally written from my own experience but to broaden the perspective a little, I have also included views from two American dulcimer maker-players: Doug Berch, who built one of my dulcimers and Jerry Rockwell, with whom I share common interests.

what can we learn from the guitar world ?

In the acoustic guitar world, there are many considerations for quality of tone, including: woods, design, size, weight, finish, set-up and the quality of construction.  Counter-intuitively, the quality of construction, in particular how neat the joints are, is perhaps the most important aspect of these.  This is borne out by some small guitars projecting a big sound with strong bass.  The theory being that if an instrument fits together very well, then the woods will not be stressed when assembled and so they will vibrate more freely. 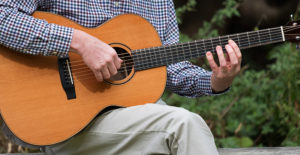 Two identical guitars but built with different timbers will sound quite different.  Rosewood back and sides gives a guitar clarity, whereas mahogany back and sides will result in a more mellow sound.  Likewise, a spruce deck will give a bright tone, whereas as cedar top results in a softer treble.  The combination of rosewood and spruce can be extremely bright and clear.  Similarly, mahogany and cedar can be extremely warm.  The choice is obviously personal.

A slightly arched top and/or back will give greater strength and so allow for a lighter design.  Light instruments are generally more responsive and favoured by fingerstyle players.

Undoubtedly, the set-up will make a difference too.  The guage and type of metal used in the strings and the action (the height of the strings from the fretboard) will change how the instrument sounds.  Again, it’s down to personal preference but most professional fingerstyle players will favour medium string gauges and medium action to balance tone, sustain, playability and a clean, buzz-free sound.  A higher action or heavier strings will give a cleaner sound, more volume but less sustain and will require more effort to play – and vice versa.

The lacquers used to finish guitars can be a closely guarded secret among manufacturers.  Aside from cosmetic considerations, the lacquer is there to prevent absorption and loss of humidity.  In general, the thinner the lacquer the better the tone, as thick lacquer can considerably dampen an instrument’s sound.  On the deck of a guitar you should be able to see slight undulations, where the lacquer has sunk into the grain, indicating that a suitably thin layer has been applied.

and more specifically for dulcimers …

Many dulcimer makers I’ve spoken to place great importance on the choice of timbers.  And in America especially, there is a wide choice of sustainable hardwoods, each with their own aesthetic and sound qualities.  The principles outlined above certainly apply and, assuming the same design, the harder or softer the woods for back and sides will give more or less clarity, respectively.  And again, assuming the same design, a spruce top will sound brighter than a cedar top.  It’s obviously personal how bright and clear you want you instrument to sound.

Clear as these differences are however, I feel that the weight and the design of the dulcimer can make the biggest differences to its tone.  My first professionally-made  dulcimer, is extremely light and this undoubtedly contributes to its loud and responsive tone.  The back and sides are of mahogany and the top is cedar, yet the sound, whilst rich, is also clear.  On this instrument the strum hollow is completely removed, which I think significantly contributes to the openness and responsiveness of tone.  There’s a subtle arch to the back and top, which helps to keep it light and strong.  Like many dulcimers the staff is hollow too.   It simply sounds good in all the tunings that I use.  Even if it is strung for EBB and I tune down to DAA it still sounds quite loud and responsive.  Indeed, this is a ‘barometer’ for a well-made instrument.

My other acoustic dulcimer was made by Doug Berch and on this instrument his design has de-coupled the staff from the head to allow more responsiveness for fingerstyle playing.  The back and sides are black walnut and the deck is spruce.  This instrument works very well for me.  It has a bright clear tone and is pleasingly loud and responsive for fingerstyle playing, with much of the volume coming from the top, and less from the back.  His use of sound holes to tune the instrument certainly works too.

I have described the differences between my two acoustic dulcimers focusing on the woods, but my instinct is that the differences in design between the two are mostly responsible for their different sounds.  Indeed, when I commissioned the Berch dulcimer, I was very specific about some aspects but I left it to Doug to select the woods.

Getting more volume from the delicate dulcimer has been the quest of many makers and two popular design innovations have emerged to achieve this.  Putting a false or double back on a dulcimer allows the inside back to resonate without being dampened by contact with the players legs. There has also been a trend, more recently, for dulcimers to have a bigger lower bout with a bridge over the deck or top.  Both of these innovations clearly offer a bigger sound and are well loved by many players.  But they are not quite right for me, as I prefer the responsiveness of a light instrument and use pickups to achieve volume, when needed.  Also, the bridged dulcimers I have played a have noticeably different tone.  The attack and decay characteristics, as well as the mix of harmonics, can make them sound more guitar-like.  As a guitarist, I want my dulcimers to sound distinctive.

To me, the most important aspect of the mountain dulcimer’s tone comes from the ‘fingerboard-soundboard unit’, which is my way of thinking of these two separate parts of the dulcimer as one integral vibrating structure.  Anything you do with the fingerboard, like relieving mass in certain places, or routing a long channel, will affect the sound of the structure as a whole.  And the placement and size of the braces on the soundboard, as well as the thickness of the soundboard – these factors will also affect the fingerboard-soundboard’s vibrational character.

I’ve always been a huge proponent of sustain, and I’m always willing to sacrifice some volume to get the nice smooth sound of sustain on my dulcimers.  I’m not at all interested in most of the innovations having to do with increased volume.  These methods tend to increase the initial attack of the sound, but you are left with very little sustaining, ‘steady-state’ vibrations.  Banjo-style bridges working directly on the soundboard are a good example of this.  Guitar-style bridges and saddles are another, and the latter will bring you more of a guitar-sound, with perhaps a bit more sustain than the banjo-style bridges.

One way I work towards more sustain on my fingerboards comes right from the brilliant work of Les Paul, who found that the more mass that was directly under the places that a string was vibrating from, helped – each fret, the nut and the bridge.  So I drill holes in the underside of my fingerboard in very strategic locations.  Each fret is left with substantial mass directly below it, as is the nut and bridge.  I have even thought about extremely dense inlays to emphasize this even more, but I haven’t actually tried this yet.

I like softer hardwoods for the fingerboard.  Honduras Mahogany is my favorite, Butternut is great, and these days Walnut is what I’m using for most of my dulcimers.  It is a little bit harder than the other two woods, but it has such a nice musical resonance !  Spruce is my choice for soundboards, mostly Sitka Spruce, but old-growth West Virginia Red Spruce is amazing when I can get it !   Sides and backs are generally walnut, but over the years I’ve used a lot of Cherry and Mahogany as well.

When speaking about the sound of my dulcimers with people familiar with guitars, I often use the sound qualities of certain models of guitar as a reference.  This is because dulcimers have no standardization of design and the wood that produces a certain result for one dulcimer builder may produce a different result in the hands of another.  There are several models of steel string guitar that have become the touchstone with which to compare the sound quality of other guitars, so the results are a bit more standardized.

My own designs are constantly evolving, but I have found that building them relatively lightly, using lightly arched bracing on the back (though sometimes I press the back flat and the arching is not visible), and having a fretboard light enough to be resonant yet stiff enough to provide plenty of sustain consistently works well for me.

As for wood, it depends not only on the species but on the particular piece of wood at hand.  Trees are not very consistent in the production of wood and every piece varies at least slightly, if not dramatically, in terms of weight, density, and stiffness.

With my design I find walnut and mahogany interchangeable in tone when used for the back and sides.  Combined with the proper spruce soundboard or another wood of similar density, weight, and rigidity I think of the tone I get as similar to a small bodied Martin (perhaps a 000 or OM) in mahogany and spruce;  A pleasantly wooden sound with punch and clear articulation of each note.  I have lately been using oak for back and sides with a spruce soundboard and the tone has qualities of similar guitars in rosewood and spruce; a more rounded, slightly warmer tone where the notes blend together smoothly.

In general, I am more concerned about the design, methods of construction and the qualities of the wood more than the particular species.

Obviously, there are personal choices to be made and what suits one player might not be right for another player’s needs and style.  The choice of woods in particular is very much down to taste, although the consensus here seems to be that design is more important in shaping the tone.  Perhaps the best advice is to find a maker who designs instruments whose sound pleases you.